Being focused on everything in life besides having a bit of fun camping and wheeling, I realized I was overdue for a trip. I needed to get out of town and enjoy the outdoors a bit. So Tara and I packed up the Nissan Pathfinder and headed to Big Bear where we found a Yellow Post campsite in the forest to make home for a few days. However, this wasn’t a totally random weekend. On the 4th full weekend of every June, the American Radio Relay League hosts a national ham radio event called Field Day. The objective of field day is to contact as many other ham radio stations on the HF bands across North America with the allotted 24hr period.

After we unpacked on Friday night, we strung up a multi-band dipole antenna at about 25 feet in the trees, and hooked up the Icom 746Pro HF Ham Radio. I spun the dial and one of the first signals I hear was a guy talking about how he was absolutely loving his new Icom IC-7300 radio which was just released a few months ago. After making sure everything was working, we hung out around the campfire and eventually called it a night.

Saturday morning started out with Tara & I cooking up some breakfast burrito’s., and eventually I got on the radio while Tara read a book. I started making contacts here and there. The antenna we put up was acting up a little bit and my radio was only putting out half the max power for some reason. After kicking on the antenna tuner, I found that the dipole was tuning on 15, 20, 40 and 80 meters. which was definitely good enough to play around for Field Day.

Later that afternoon Tara and I somehow started talking about trigonometry… I’m not sure exactly how we got on this topic but I blame the juice-box-wine she was having! Soon after the trigonometry talk, she sat in the drivers seat of the radio and started making contacts here n there. She never really liked the hunt n peck method of field day operations, so she eventually started calling CQ Field Day and Wham! Signal after signal started rolling in. I was impressed at the way she logged the contacts quickly and only asking me for call sign verification of those who mumble and the ones with weak signals. After she logged nearly 60 contacts I got back in the drivers seat, for a little bit, then went for a short hike to explore the area around camp. Dinner time rolled around which was cooked on the open fire. We sat around the fire even after dinner talking, joking and having a few adult sodas. Time seemed to just fly by.

The next morning, after breakfast I made a few more contacts before the battery that the radio was running on, ran out of juice. Filed day wasn’t quite over but I was feeling pretty good about even getting out and operating. Tara and I packed up and then explored the lesser traveled roads of the Big Bear forest before heading back down the hill to reality.

During this  trip I’ve realized that the accessory wiring in the Pathfinder is getting old, and that the alternator that’s been in there for many years isn’t putting out the power that it should be. I guess it’s time to put in one of the new high output alternators that DC Power Engineering made for Rugged Rocks, and probably find a place to run a second battery to feed the ARB fridge and other accessories. I want to be able to run that HF ham radio off of the trucks power and be able to keep it topped of for full power output.

Although I’ve got some work to do for get serious about field day like I have in past years, this was a great start getting back into it. I’m glad Tara had fun on the radio and maybe next year we can get a few more radios going. maybe I’ll even brush up on my morse code skills to bring in the double points contacts, and maybe even bring some friends along with us. we’re going to need some big antennas for 2017. Lets get competitive.

After doing a little maintenance on Joeys ’79 Toyota we went for a drive up Cleghorn Trail and after a few hours we found ourselves on top of the mountain! Not a bad way to spend a Sunday. 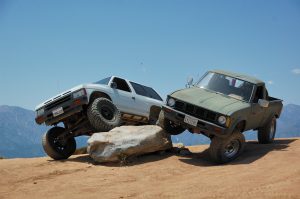 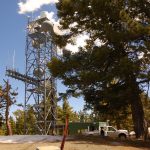 As a member of the OAUSA.net outdoor adventure group, I was with another member named Jon scouting out some potential field day sites when we coincidentally ran into Chris, N6LXX who was on the way up the Blue Ridge radio site which is near the camp ground we wanted to go look at for field day. After chatting it up with Chris for a little bit and getting more info about the camping in the area we went with him to the radio site where he was doing some repeater maintenance on his linked 6M machines. It was quite the sight with numerous towers and radio rooms. We weren’t able to browse around for very long before we were reminded by a few friendly signs warning us of FCC regulated RF exposure limits being exceeded in the area … but we continued on. We got to browse around quite a bit  at the equipment and learned a little bit about microwave point to point links which was a bonus to our original plan of just scouting out the camping high up on the END_OF_DOCUMENT_TOKEN_TO_BE_REPLACED 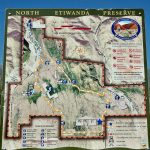 In the backyard of Rancho Cucamonga hides what was once a fairly well kept secret, Etiwanda Falls. A few years ago the North Etiwanda Preserve hiking trail was put in and the falls now attract many people every weekend. It’s not overloaded but you will most likely run into some people up there.
Getting there is simple. Exit the 210 freeway at Day Creek and go North on Day Creek which will eventually curve to the right and dead end into Etiwanda Ave at a stop sign. Make a left to head north on Etiwanda Ave. which will dead end into a dirt parking lot where your hike will begin.

The map at the beginning of this article shows the proper North Etiwanda Preserve hiking loop however if you follow the map counter-clockwise, at the fork for area ‘B’ there is a path to continue north, there is a gate there that you will need to walk around. You will know you’re at the correct fork when you see the trail marker pictured to the left. in the background of this picture is the gate that you will need to walk around. Also on the trail marker will be blue writing with arrows that say ‘waterfall’, once you spot the writing it’s pretty hard to go the wrong way. Continue on this path until it dead ends which is about a mile up. Here are a few pictures END_OF_DOCUMENT_TOKEN_TO_BE_REPLACED

After numerous years away from wheeling the mild yet fascinating trails of the anza borrego desert in southern California, I made a return trip. I got a call from a few friends inviting me out for an easy camping trip at Fish Creek and we’d go explore Sandstone Canyon and the surrounding area. Although the trails aren’t difficult, having a 4×4 vehicle is strongly recommended being that the washes and canyons have sandy bottoms. This is the kind of trip you’d go on when you want to see some pretty unique places and relax without having to worry about breaking your rig in the middle of nowhere. There are a few cool obstacles out there such as “the squeeze” “Diablo dropoff” and “pinion dropoff” but the drive up sandstone canyon will have your eye’s glued on the canyon walls when you should probably be watching where you’re driving. There is also some wildlife out there so if you find your self in this part of the desert, please drive at a reasonable speed. On this trip, I got word over the ham radio that we had 60 MPH gusts and rain back at camp so we headed back and called it a day after cleaning up. Due to the weather we didn’t get a ton of tie to explore but sandstone canyon should be on your list of places to visit next time you’re down there.
I didn’t get too many pictures of this trip but here are a couple cool shots that I got: 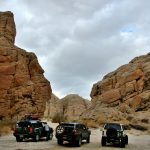 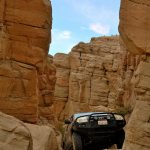 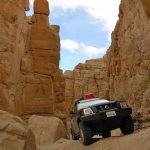 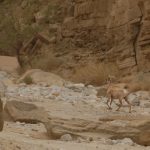 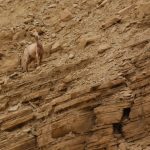 After waiting for well over a year, Toby Keith’s bar at Victoria gardens finally had their soft opening today. I was there when they opened the doors with a handful of friends. we had a few burgers and beers which got a little mixed up but nothing to complain about on the first day of an unofficial opening. They seem well staffed for the anticipated rush for later this evening. speaking of the staff… well, lets just say you’ve got to go them for yourselves.. did I mention they are already dancing on the bar?
All in all, It’s a super cool place with good food, cold beer & good looking friendly waitresses. There is a ton of fun to be had there with live bands on stage and a dance floor.
Although it’s a soft opening it is open to the public, so go check it out!

As the a whole the 2011/12 winter season was extremely mellow. Southern California had a late winter that seems to be wrapping up fast however last weekend there was a decent storm. Big bear got over 2 ft of snow and with all the trouble on the roads to and from big bear, the slopes weren’t crowded. Here is a sample of the fun I had yesterday:

It’s a little difficult to believe that this is so. cal. snowboarding but as we get closer to summer we’ll be hitting the beaches and sooner or later we’ll all be doing the snow dance once again. See you next year.

After a weekend in Calico, CA exploring the canyons via Teryx, I put together this 3 minute video.

I was browsing around online and found this cool rock crawl video filmed in Johnson Valley at the hammers trails.
enjoy: